The Book of Aggression: Chapter II of III 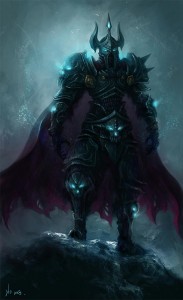 After taking a breath to gather yourself you look back at him, he’s no longer looking at you. He is humanoid. And dressed for battle. He moves quickly, decisively. You think you hear screaming, a terrible screaming. As if one, no, many, are screaming out for something. But it’s worse than that, what are the screamers screaming for…

There is an aura about him that you did not initally notice. Is it red? Is it black? Is it power? Is it death? Or is it just your imagination? You ponder this for a moment, then realize he’s looking through you again!

This gaze isn’t as intimidating as the other. What he’s doing you soon realize. He’s studying you. But none you’ve met before have gaze so. Is this real? What does he want to know? Did he just nod?!? Your eyes meet his …

“In a time long ago, this world, the world of the raven was a flourishing land. There were great cities and secret keeps. The cities were bustling with the activity of many citizens. Young, old, naive, and wize people traversed the land. Humans were the only beings posessing the ability to speak. For a time…

First came rumors, then 2nd hand testimonials, and finally it came to be realized that other beings could speak! These beings wanted into the societies of this world. At first they tried, but there were problems. These ill-begotten beings brought with them an epidemic worse than life itself. Unbeknownst to all, they were destroying the world. Then, one day, the sun didn’t rise, yet the night had ended.

Nothing. That’s what was left, nothing. No city bustle, no secret plotting, nothing. Every single being was gone. Then, after countless unobserved eons, the sun rose. Speaking people woke. They ventured into cities, learned of commerce. They ventured into the wild, learned of nature. They heard rumors and searched to see if they had any basis. It was in this time when a being emerged. A being that was old yet new. A being that was young, yet had much experience. The being knew of it’s nature, for it has always existed.