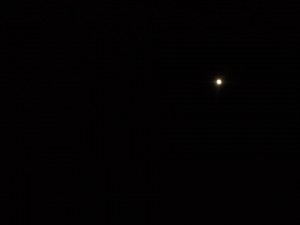 The moon during the night. Interestingly, this is what the orbs looked like.

If you haven’t read the first part I suggest that you do first. Read it here, Mt. Lantoy, a ghost story

The rain didn’t hold back forcing us to huddle inside Rain’s tent. Manoy Rodel and our other guide decided to spend the night at their homes but promised to be back early in the morning. We didn’t mind and continued on with our customary socials over alcohol. Not at my best form, I felt the kick of the rum early. I excused myself from the rounds but stayed on with the conversation.

Sitting right by the entrance of the tent afforded me a view of the surroundings while the rain lessened to a drizzle. At one moment I noticed two orbs of whitish light which hovered about, moving in unison. I pointed out to everyone what I saw but would not make a big fuss over it. Our conversation however would shift to the paranormal, ghost stories and all. 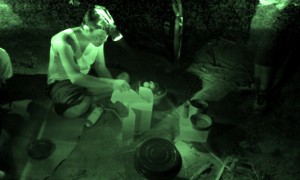 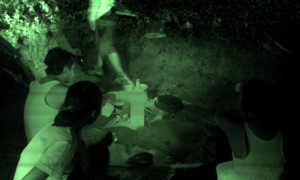 Another view of us preparing dinner. 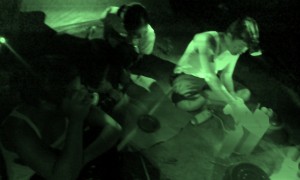 We were done with socials at around midnight. The girls, maybe spooked from all the talk, decided to sleep together and now refused to budge. Rain and Jepoy were also as comfortable as they could in the same tent. Everyone was preparing to sleep. Gege on the other hand started acting strangely.

In the darkness of the night he went on to clean the utensils from where we prepared the rice that evening. It was a little further from our camp where the highlight is a scenic view of the river and below it, the falls. I stopped him head on concerned for his safety. It took a while of arrogant discussion between us before he would concede but not before making me promise to never leave him or anyone from the group. I was dumbfounded. What he said didn’t make any sense.

Rationalizing that he was drunk, I brushed it off caring about nothing else but to get him to sleep. While he took a piss, I sat down from a distance still keenly observing. The edge of our campsite was a drop to the falls. I couldn’t risk him moving about specially that he didn’t seem quite himself. A little afterward, Gege was now refusing to get inside the tent. 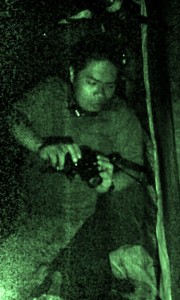 He started blabbering nonsense and seemed mighty distraught. I sat him down and got him talking, hopeful for him to get tired and eventually fall asleep. My pleas to get him inside the tent however would fall on deaf ears – always answering with headstrong shake of his head. I asked what bothered him and only after with much hesitation, he pointed at a clearing where a single coconut tree stood. I turned to look, unable to make out of anything. The clearing was pitch dark but I didn’t dare use my headlamp.

“Naay mga taw, ngtan.aw nato (There are people there, watching us)”, Gege said in a meek voice, fraught with fear.

He was getting to me and creepy was an understatement. I called on Rain for help. The girls who could hear us from the tent couldn’t sleep. Rae started praying. Rain tried to calm Gege down assuring him that whatever he saw, he saw too and that he had nothing to worry. Gege wouldn’t hear of it and instead became more agitated almost to the point of crying.

Thankfully fatigue and alcohol finally got him to sleep and at that point I was relieved. Rain and I got him inside the tent but not before having to drag him throughout. The tent was now packed and with the turn of events, there was no way I was going to sleep alone in my tent. For the first in all my mountain climbs I was afraid to sleep alone. Resigned to my fate, I decided to sleep right outside the entrance of their tent and comforted myself with the idea that I would know if Gege left the tent, if he would.

For a moment it seemed that we were through with the worst. How little we knew. It rained again, as if in taunt, leaving me no recourse but take shelter with the rest. Inside, there was no legroom to stretch but thankfully cigarettes helped me sit the night away.

And then it started. Gege made low continuous indistinct sounds, as if talking to himself. Then it became more raging, oftentimes letting out an angry, sharp or sometimes abrupt tone. His tongue would twist, snarling, while giving out enraged growls. Gege, our friend, was fragile and frightening at the same time.

For every 30 minutes or so the trances would stop and he would fall back to deep sleep. And then it would happen again. I sat at his belly to keep him down while Mai-Mai straddled his head. He spoke at us in different language each time but the growls and snarls were ever present. In Japanese, Cebuano, Spanish, Latin and another language that we’ve never heard of.

Eventually after the trances, he would come back to himself and he’d tell us what happened or at least how he understood things. He said that the beings were trying to communicate with him but there were a lot of things that he didn’t understand himself. One of those was that they were offended when our guide took off a branch and made it as a walking stick.

Another was that previous campers littered the campsite, the same one we camped on. And in order to appease them we needed to make an offering and break off from our plan to summit Mt. Lantoy. The foremost was that we were to backtrack in the first light of day and disperse salt at every river that we crossed. We all took his counsel as gospel, noting them.

Their final demand was that we were all to return to Mt. Lantoy, after 2 years on the same date. For what reason we didn’t know. We all could hardly wait for morning.

The Children of Mount Lantoy

All the trances came to him as a dream. He relates that he saw our group summiting the peak of Mt Lantoy but he could not cross through a  bridge (interestingly there is no bridge within the path to the summit). Children also came to play with him. It seemed that they were climbing up the mountain with the quick flexes of his feet akin to taking strides.

Above, further beyond and beneath the cave (Balay sa Agta) was their Kingdom which was made of blinding white marble and lush greenery. They cavorted in the grounds and Gege would giggle in his sleep as if playing with the children. They offered him food and drinks.

After hesitating for a few seconds for a quick decision, Mai-Mai slapped him as hard as she could and to his senses. The trances were now over and Gege would finally sleep soundly. Morning had finally come.