Over a year ago our club decided to climb Mt. Lantoy. This is part 1 of my account of that fateful climb. A climb all of us will never forget.

I remember with difficulty the events during the morning of March 3, 2012. Somehow my memory fails me on this regard which I attribute to the multitude of times our climbs would commence from the South Bus Terminal of Cebu City. Our itinerary suggests an early morning trip, quite similar to timetables as that of Osmena Peak and Mount Lanaya climbs. There were 8 of us for this trip. None too seasoned but everyone with their inner thirst for adventure and for some, a quick weekend getaway.

We arrived an hour or two past 12 in the afternoon at Argao and opted for late lunch which was then followed by our last buys. We got alot of curious stares from the market, no thanks to our backpacks screaming outsiders, and the common question as to where we were headed. On our part, we knew almost nothing about the mountain so we indulged ourselves to the common questions of how far, how hard of a climb and everything else we could think of Mt. Lantoy. Thinking of it now, I wonder why no one of us thought of the legend of Maria Cacao and any other folklore the mountain, the falls, or the river had as stories. 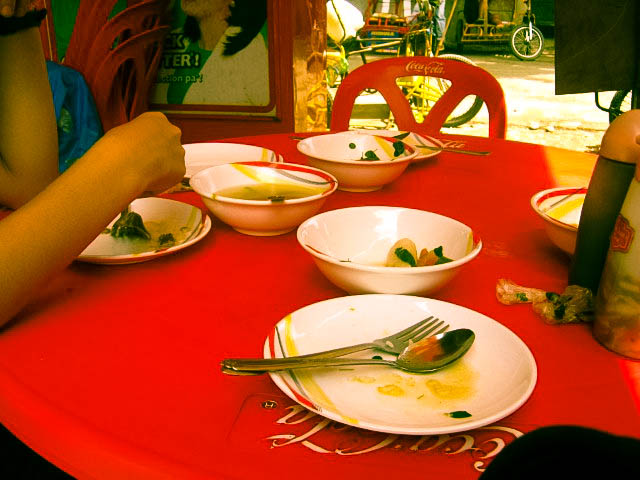 Done with lunch and groceries, we took another ride now en route to the Argao Tourism Center where we were to meet our contact from the tourism office. After a couple of complementary photo-ops and getting to know each other we then proceeded to the habal-habal center of Argao where we were took a ride to the jump off at Brgy. Usmad. Fare was at around Php25. 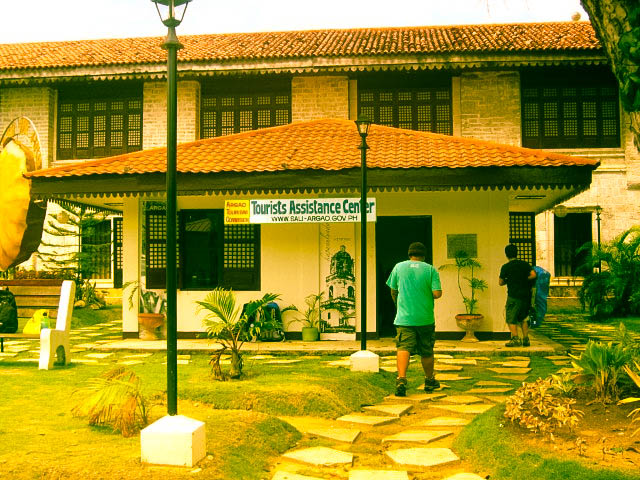 Complementary visit at the Tourist Assistance Center office to meet our contact and registration. 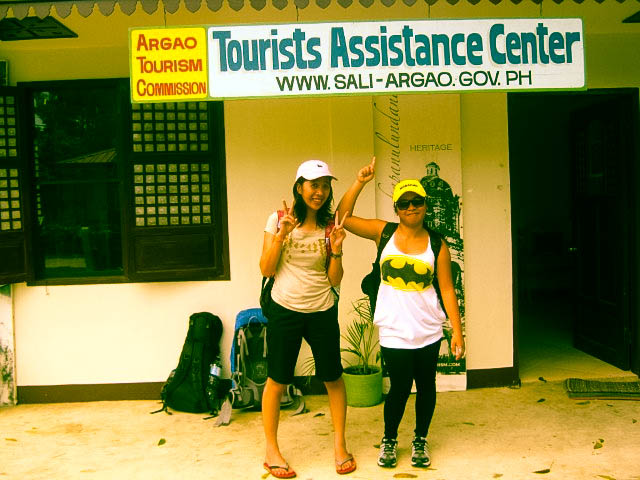 Rae and Mai2 infront of the Tourism Office – Argao 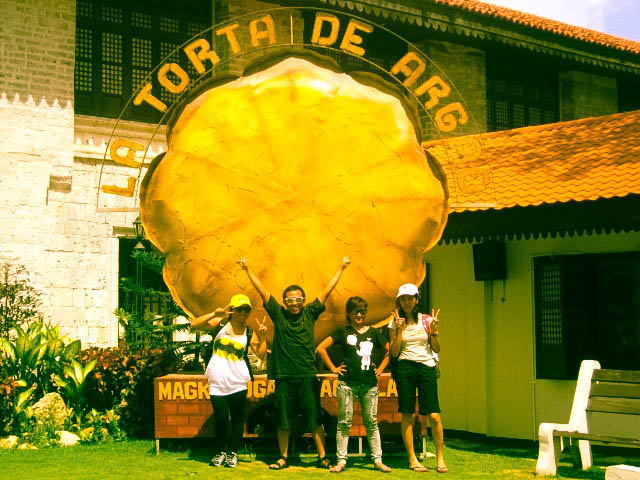 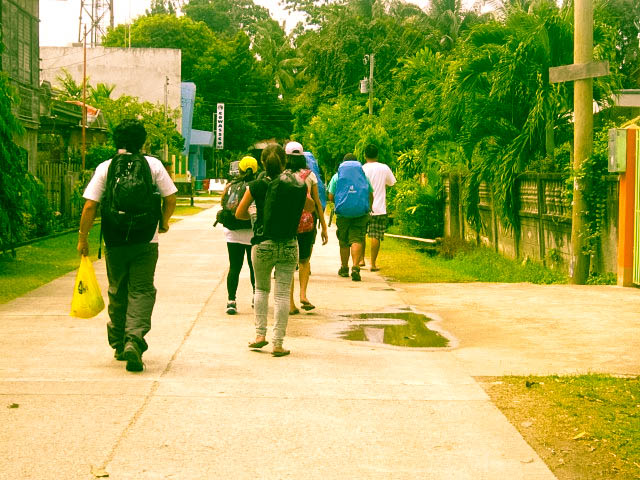 On our way to the habal-habal terminal

Upon meeting our guide, Manoy Rodel, we bade farewell to our Argao Tourism contact who by then invited us for tuba after our Mt. Lantoy venture. From this point we hiked through a dried up river bend with a majestic view of a mountain with thick lush vegetation. It seemed uncanny that we would later cross through 3 rivers which seemed alive with teeming rapids and this one was all dried up. 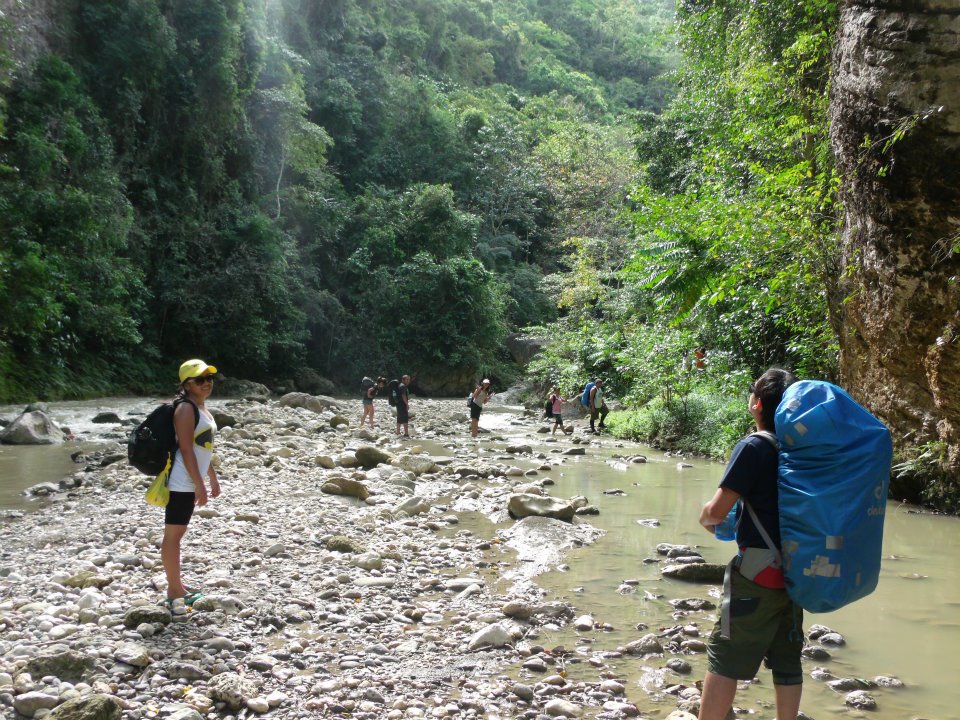 After the 3rd river crossing, Manoy Rodel broke off a tree branch and offered it to Jepoy to use as a walking stick. We would then humor him that he seemed to be the reincarnation of Jesus with his hair and thick beard. Jepoy would shrug off the unwanted attention and happily take the walking stick. After a few minutes of moderate ascents it would be 4PM by then.

It was here that I decided to sweep the group. Mai2, Jepoy and I were at the tail and taking care not to put too much pressure on Jepoy, I took a couple of breathers myself. Eventually deciding that we’ve taken more than enough rest I pushed ahead, deciding to establish the trail and wait for Mai and Jepoy. I then came about a bend of an established unpaved road path. It formed an italic L and I was stumped as to where to proceed with no obvious trail-signs in sight. Onward was a leisurely walk and the right path meant a couple more of moderate ascents. Without thinking, I waited for Mai2, dropped my bag when she arrived and ran as fast as I could onward. 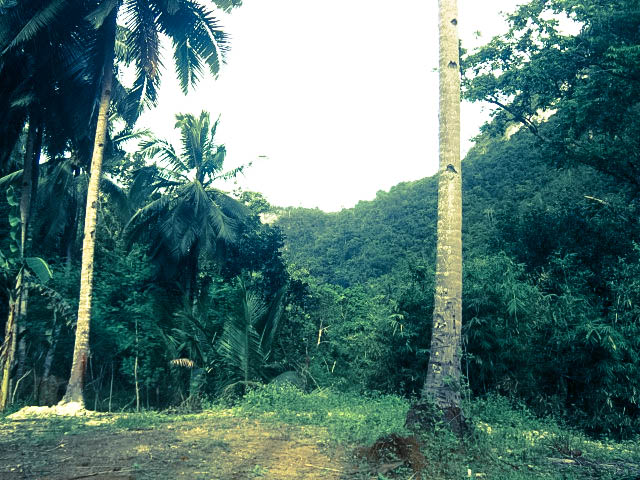 View from the campsite toward the dirt road. 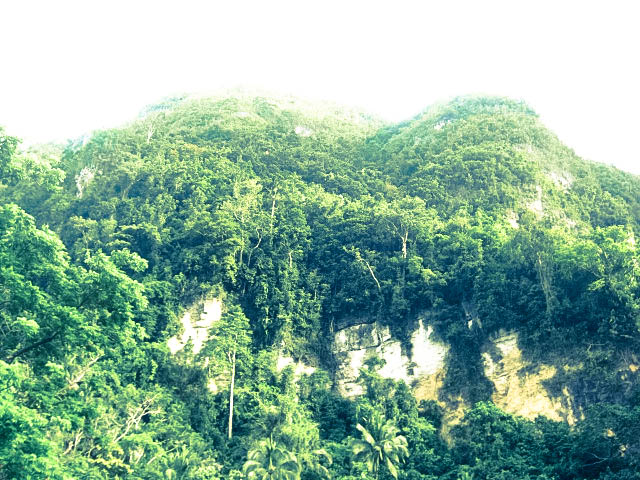 Mount Lantoy looking down at us. View taken from our campsite at Bugasok Falls.

Deciding that I’ve ran far enough with respect to the probable pace of the lead group, I then came about a clearing of wide expanse with good view of the surrounding mountains which towered from above ostensibly watching us from every direction.

Below, the sound of water falling roared about. Even while still catching my breath, the first thought that came to me was how this was a perfect place to camp. From the ground, a distinct placement of rocks created a circle insinuating campfire while a few garbage littered about, coming off as recently left.

The area itself would be seemingly warded by a large black rock which was opposite from the edge of the clearing which seemed for me, appropriately placed upon. If you would follow the trail right behind the rock it would then lead you to the back of the falls just before the drop. Later I would know that the roaring rumble of water would actually be Bugasok Falls.

Relieved that we could probably camp for as long as I could convince the rest of the group, I darted back to where I came from and was then met by Mai2 who by then had rejoined with the lead group. Rain would later comment that he found it odd that we didn’t notice them when they were just right above us, a few meters away from the bend. 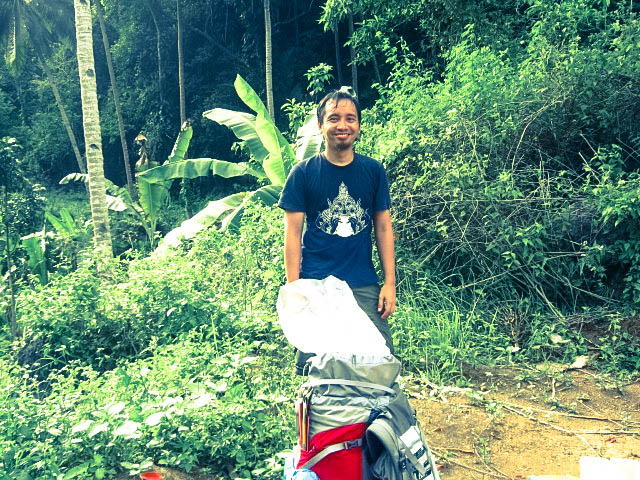 Flashing off a grin since we finally had our emergency camp. I had no idea what we would experience that evening.

Somehow I then convinced Rain that we setup an emergency camp instead of pushing for the summit. He must have been tired himself or didn’t want to eat spoiled pork. Evening was about to settle in and I was bothered that the pork we prepared might be spoilt since we didn’t have the chance to pre-cook it. 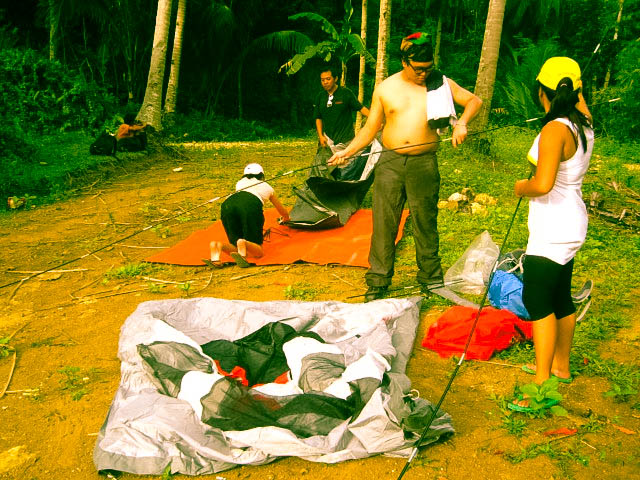 MALAKAT Outdoors preparing camp. A better view of the dirt road straight ahead. Guy in orange is one of our guides. 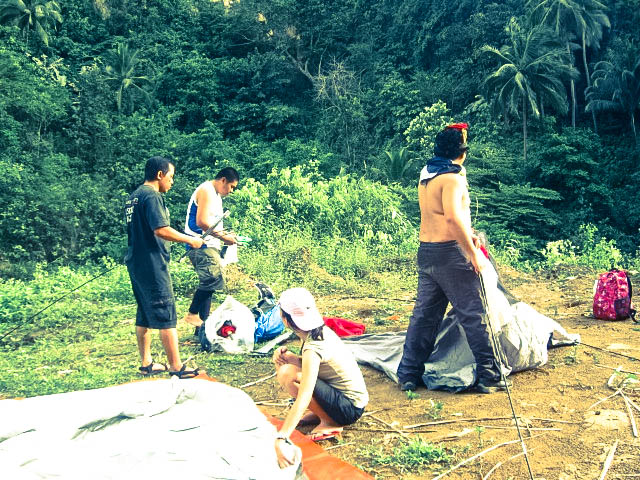 Us preparing camp. Straight forward behind the bush would be Bugasok Falls. On the left side of that would be where I would see the two hovering spherical objects with radiant light during the evening.

I was happy to show the rest of the group the clearing I found. Manoy Rodel and his other companion made no comment and I had no idea what they had in mind. I did find it amazing for them to accompany us at the camp when I felt that we were secure within the campsite. We were still within access to a road albeit unpaved and the clearing itself suggested that this was frequently visited by people or at least by locals.

With no other thought other than relief of finally getting to setup camp, we had our photo-ops and prepared dinner. Rain and I accompanied Gege while he prepared the rice to be cooked. We followed the path behind the rock which was the only way for us to access the water source safely. From the tents, the girls prepared our evening meals. 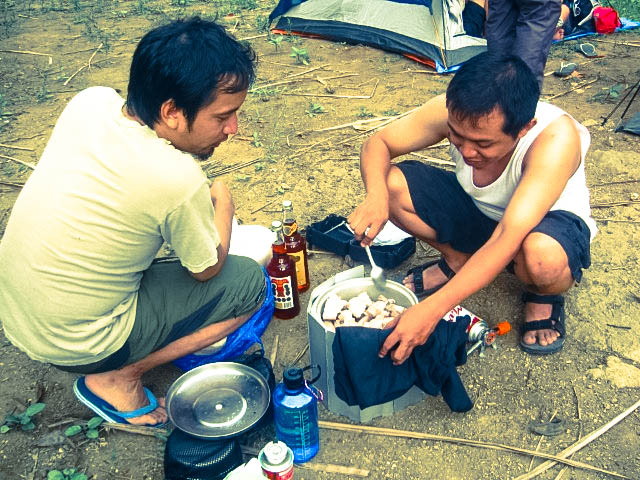 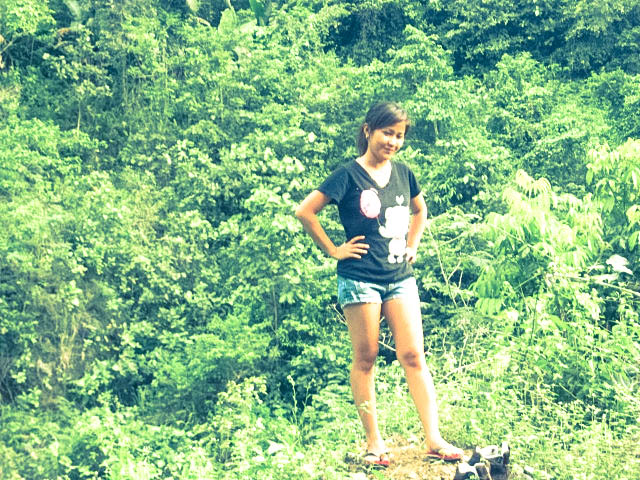 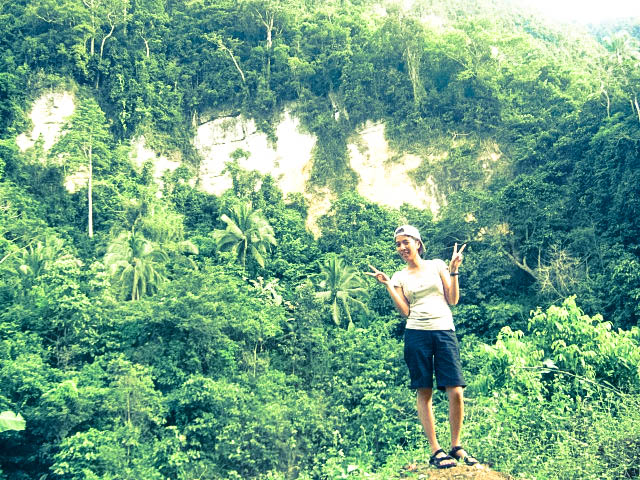 When dinner was ready Manoy Rodel didn’t join us as he had to rush home but promised to come back. When he did we’ve already started socials noticing nothing out of the ordinary. Then the moon left us followed by a burst of strong winds from every direction. The rain came next in heavy downpour. Our surroundings was now pitch black. It was now 9 in the evening.